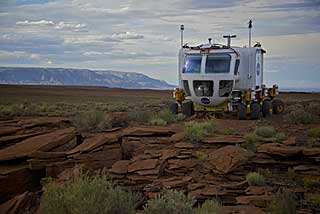 The Lunar Electric Rover crosses the Arizona desert during the 2009 Desert Research and Technology Studies (RATS) field test in September.

The Human-Robotic Systems Project includes four robots with four very different missions. NASA’s Ames Research Center, Moffett Field, Calif., is building a robot called K10. Because it carries an array of cameras and laser scanners, this robot can operate in an unstructured environment by itself or with human oversight. ATHLETE, a large, six-limbed robot built at the Jet Propulsion Lab, is designed to transport large payloads across a wide range of terrain, including steep slopes and rocks. Johnson Space Center has built a Lunar Electric Rover-or LER-that could transport astronauts across long distances on the moon or Mars someday. Finally, Langley Research Center is building a crane-like robot called the Lunar Surface Manipulator System (LSMS) to help with assembly and loading missions on planetary surfaces.

These systems are prototypes for vehicles that will someday operate on extraterrestrial surfaces. Today, the prototypes are being tested in harsh analogue environments. For instance, during the summer, K10, ATHLETE and the LER spent weeks at Black Point Lava Flow in Northern Arizona. 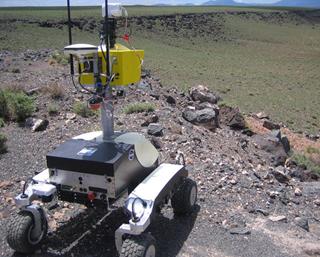 Terry Fong, director of the Intelligent Robotics Group at NASA Ames, said, “Although ATHLETE, K10, and LER have very different designs and are used for different missions, they share common needs. For example, all of these robots will sometimes be “teleoperated” with direct joystick control. This requires high-speed communications with the operator. At other times, these robots will be operated with long transmission delays over low-bandwidth communication links. In addition, each system must integrate many other applications, including sensors, graphical interfaces and navigation. The robots also run a variety of operating systems, including Linux, Mac OS, VxWorks and Windows.”

All the NASA robots are designed to share a common data communications interface. This saves significant deployment costs, reduces training requirements and leverages code and experience between the centers. Someday, when NASA launches the systems, having only one communications architecture will eliminate the need for duplicate testing, simplify operator equipment and reduce ground staffing. 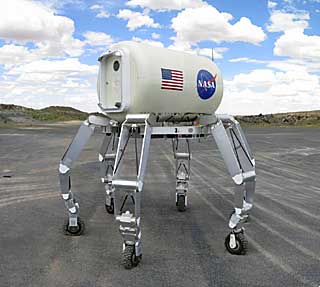 The ATHLETE robot is shown operating at Black Point Lava Flow. ATHLETE has six independent, wheeled legs that allow it to drive and walk across rough terrain.

Fong continued, “Getting four complex robots with very different designs to use a common data system was challenging. The Data Distribution Service for Real-Time Systems [DDS] standard supports very flexible service parameters. We found that we could adapt the middleware to the unique needs of each robotic system.”

Stan Schneider, CEO of RTI commented, “NASA Ames was our first middleware customer in the early 1990s. The advances in the NASA robotics program are striking; we are proud to be a part of it.”