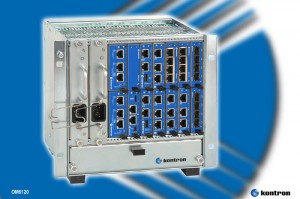 The compact Kontron OM6120 is now available through Dedicated Systems Australia. It brings exceptional performance and versatility to a wide range of quad-play telecom applications and high bandwidth datacom applications with significant cost improvements compared to conventional MicroTCATM platforms. Cost optimization is thanks to its streamlined design that includes Power Management and Fan Control on the backplane, and pluggable Power Supply Units instead of MicroTCATM Power Modules. All AdvancedMCTM modules connect to both MCH modules in a dual-star base interface (GbE) on AMC ports 0 and 1. Fabric ports 4-7 of all AdvancedMCTM modules connect to MCH 1, while the AdvancedMC modules’ extended fabric ports 8-11 connect to MCH 2, enabling the Kontron OM6120 to support a wide range of configurations.

The possibility to use single and double-width form factor AdvancedMCTM modules provides extraordinary flexibility for a wide-range of applications that demand high processing power, high throughput and low latency. In combination with the layout of two rows of AdvancedMCTM bays, the fabric options facilitate the implementation of dual-channel processor architectures with arbitration or checkpoints between the channels. By accommodating a high number of multi-core AdvancedMCTM modules and allowing a tight coupling of processors over high-speed communication links (over the backplane), the Kontron OM6120 is also well suited for image processing applications in single-channel or dual-channel architectures.

The port mapping and use of clocks on the Kontron OM6120 backplane corresponds to SCOPE alliance (SCOPE port mapping) recommendations. This enables the synchronization of processor AdvancedMCTM modules to an internal or external clock for applications such as real-time processing or complex robotic motion-control.

The Kontron OM6120 chassis has removable mounting brackets at the sides. Since the width is less than half the size of a 19″ frame, two OM6120 chassis can be mounted together in a single 19″ frame, providing space for 24 modules in a 5U, 19″ form factor. An extra (redundant) fan tray can be mounted on top. The Kontron OM6120 is available with pedestals for table top operation, making it ideal for lab development.

The cube design ensures the most efficient use of space for AdvancedMCTM modules while keeping the cooling simple (maximum two AMCs in-line in the air stream, or one double-width AMC). Cooling in alternative chassis designs with 3 or 4 AdvancedMCsTM in-line is much more demanding. In comparison with other MicroTCATM systems or rack mount servers, the Kontron OM6120 also achieves unparalleled computing density (in terms of AMC space per total chassis volume).

The basic Kontron OM6120 configuration contains two AC power supply units, so no extra AC/DC converters are needed. Also included in the basic configuration are two Kontron AM4901 Management Carrier Hubs (MCH) in a cost-optimized design. Additional Kontron AdvancedMCTM processor modules such as the Kontron AM4010, Kontron AM4011 or Kontron AM4101 can be added according to customer requirements. The Kontron OM6120 AdvancedMCTM platform ships fully configured and tested, including an installed operating system (Windows, Linux Red Hat or WindRiver, VxWorks).